Caffeine in Coffee – All You Need to Know and More!

Everyone knows coffee contains a lot of caffeine. But how much caffeine in coffee is really? How much of it would be bad? And how much of it is good?

Those are questions that few people like to answer. That’s why we’re going to talk about them here.

Especially if you are a heavy coffee drinker, you’ll want to know whether your consumption is safe or healthy. And we’re also talking about a few more critical factors that you may want to know.

So, ready to start learning all about caffeine and how it works, where you can find it, and more? Then keep reading!

Caffeine is a stimulant of the central nervous system. You can find it in a wide array of beverages, especially coffee.

It is not a simple stimulant, though. Caffeine can be strong enough to stimulate your nervous system, as well as your heart, muscles, and senses.

The good thing is that caffeine is not strong enough to be dangerous. So it is still seen as a safe and sometimes helpful stimulant. 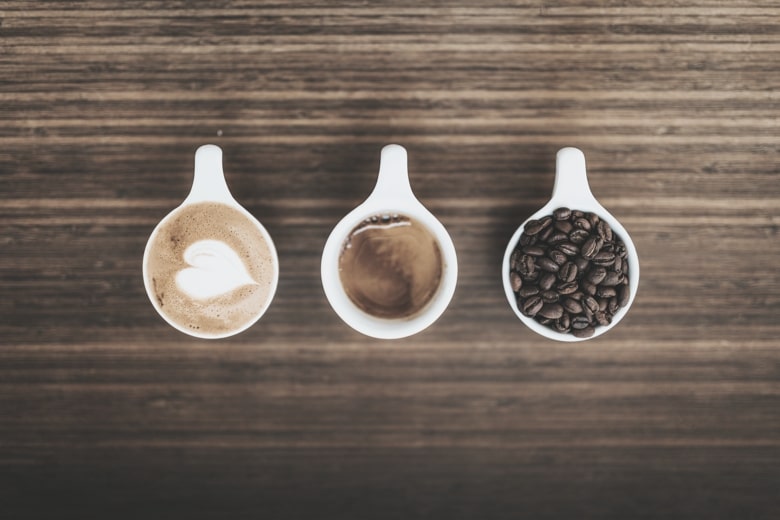 Now that you’ve learned what caffeine is and how it affects your body, you may want to learn how it can help you. Here’s what it does:

There’s no mystery about this – caffeine helps to wake people up. Being a stimulant, it works wonders to get rid of sleepiness. As easy as drinking a single cup of coffee will give an energy boost throughout the entire day.

From giving a boost in energy to improving exercise performance and even helping with metabolism, caffeine is super helpful for athletes. But anyone can really get its benefits still, as it helps with concentration in workouts, and also reduces muscle pain.

Moderate consumption of caffeine is also known for helping with cognitive factors such as concentration, short-term memory, system processing, complex problem-solving, and more. And it works well in both young and old people.

Coffee also contains lots of antioxidants, and that means it helps with metabolism and weight loss. You can improve how much weight you lose by drinking enough caffeine a day. If you into tea, then take a look at our best article Best Green Tea Brand for Weight Loss.

Caffeine won’t solve all bodily functions and issues. In fact, consuming caffeine may also produce a few adverse effects on your health. Here are a few of them:

While it won’t cause anxiety per se, caffeine may boost its symptoms. So it is important to drink coffee moderately if you have anxiety disorders or similar mental issues.

People who already have problems sleeping may have even more issues when consuming caffeine. It is known that drinking caffeine after 4 PM may have adverse effects on sleep at night.

While the addiction with caffeine is not hard enough to be considered an addiction per se, it does provide a few withdrawal effects when someone stops consuming it consistently. So, yes, caffeine can be regarded as sort of a slightly addictive stimulant.

There’s a lot of evidence that caffeine and coffee may produce acid reflux and heartburn. Those with a sensitive stomach or digestive systems tend to suffer the most with caffeine.

While many people believe that coffee helps with blood pressure, it is actually the opposite. Caffeine could have adverse effects on blood circulation, causing slight but abrupt negative changes in blood pressure.

May Cause Brittle Bone

While there’s no clear evidence that caffeine causes bones to be brittle, there are some small but essential studies that confirm it.  People who drink too much caffeine per day could start excreting calcium through their urinary tract which promotes osteoporosis and other bone issues.

Similarly to promoting calcium excretion, caffeine may also inhibit iron absorption. People who have anemia may find coffee to worsen their condition.

Want to know the coffee caffeine content? Then you’ll need to know several factors that change how much you may be consuming. These factors are:

Robusta, as an African species, tends to have twice as much caffeine as Arabica does. So when you drink Robusta, you may be ingesting double the amount of caffeine in a single cup of coffee.

Following this, you can say that light roast coffees have less caffeine than medium and dark roasts. Despite the stronger taste and smell of the latter, light actually has more caffeine, so it will give a way stronger energy boost.

Brewed coffee contains more caffeine than espresso, which also contains a little more than instant coffee, which provides much more than decaf coffee, and so on. Depending on its preparation, coffee also changes in caffeine amount.

There shouldn’t be much to discuss here. The more coffee you drink, the more caffeine you will ingest – similarly to any other food or beverage that contains caffeine.

Coarse grinds of coffee do not brew as well as fine ground coffee. As water passes through the coffee, it will get more caffeine and produce better coffee from fine dust. In contrast, coarse ground coffee does not mix well with water, which eventually leaves a lot of caffeine behind.

Similarly to the ground type, if you use too much, too cold, or too hot water – then the coffee will not brew with the same amount of caffeine. Especially iced coffee and cold caffeinated beverages tend to have much less caffeine than hot alternatives.

How Much Caffeine Is in a Cup of Coffee?

After learning what factors change the amount you can find, it is vital to go over the amount of caffeine in a cup of coffee that you can find. Here’s what you should know:

All the coffee that comes from regular brewing methods tends to have a lot of caffeine. This means about 70 to 140 mg for every 8 ounces. Overall, a cup of brewed coffee can have around 95 mg of caffeine.

Caffeine in espresso is not as strong as in regular brewed coffee. This happens because it is mostly produced from the steam or the boiling of the water passing through the ground coffee. Eventually, this reduces the amount of coffee to 63 mg per cup of coffee, which is almost half of what brewed coffee offers.

Offering similar amounts to espresso, all beverages like macchiatos, Americanos, cappuccinos, and moccachinos, tend to have about 63 mg of caffeine in a single cup.

But those mixes that contain milk, honey, vanilla, or chocolate tend to eventually have as little as 40 mg per cup. This is a massive drawdown from standard espresso.

This one dissolves in water really fast. That’s why it tends to contain decent amounts of caffeine. But still, the overall processing to make the instant coffee powder tends to get rid of a lot of it.

That’s why you are likely to find instant coffee to offer about 40 mg of caffeine per cup, which is not too much.

Lastly, you will find caffeine in decaf coffee to be the lowest in the whole list. This wouldn’t be a surprise as decaffeinated coffee has that kind of purpose.

But that doesn’t mean it contains no caffeine at all. In fact, it may contain up to 10 mg of caffeine in a single cup. Usually, though, they contain between 3 to 7 mg of caffeine, which is little enough to say that it is indeed decaffeinated.

How Much Caffeine in Popular Coffee Brands?

After learning how much caffeine you can find depending on the type of preparation of the coffee, now it is time to determine how much you’ll find according to the most popular brands. Here’s what we found:

Everyone knows about Starbucks due to its well-flavored mixes and unique offerings. However, Starbucks also offers high caffeine amounts in its servings.

A Short cup of coffee or about 8 ounces may contain up to 180mg of caffeine, which is a lot. A Tall or medium-sized cup may have up 260mg in just 12 ounces. And Grande at 16 ounces and Venti at 20 ounces of coffee, may contain between 330 and 450mg of caffeine.

Luckily, the Espresso from Starbucks contains only 75mg. That’s why most of its drinks tend to be pretty safe and not too hard. Options like Americanos, Lattes, Cappuccinos, and similar ones tend to have 75mg as well.

As for Decaf Coffee from Starbucks, you are likely to find about 10 to 30 mg only, depending on how large the cup is.

The mg of caffeine in coffee from McDonald’s is not the highest. That’s why many people don’t like McDonald’s coffee because it doesn’t energize as Starbucks does.

But at the same time, it is an excellent choice for people who like their coffee mild enough to match their demands without overly energizing.

That makes McDonald’s Espresso also very low on caffeine, at only 71mg per 12 ounces cup. And their decaffeinated option may go as far as 15mg only. You could say McDonald’s offers less than half the amount of caffeine that Starbucks offers.

But not many people really drink coffee from McDonald’s. In fact, a more popular fast-food chain would be Dunkin’ Donuts. And that’s for a good cause – their coffees are extremely well-caffeinated.

A Small cup of coffee of 10 ounces at Dunkin Donuts can go up to 215mg of caffeine. So, in larger options like a Medium 16-ounces or a Large 20-ounces can go between 200mg up to 450mg of caffeine in a single cup. Their biggest Extra Large cup of 24 ounces can go over 500mg of coffee.

A cup of coffee from Dunkin Donuts can be enough to give yourself a boost throughout the entire day.

Luckily, their Espresso doesn’t contain more than 75mg of coffee usually. So, most of its most delicious drinks are not too strong. 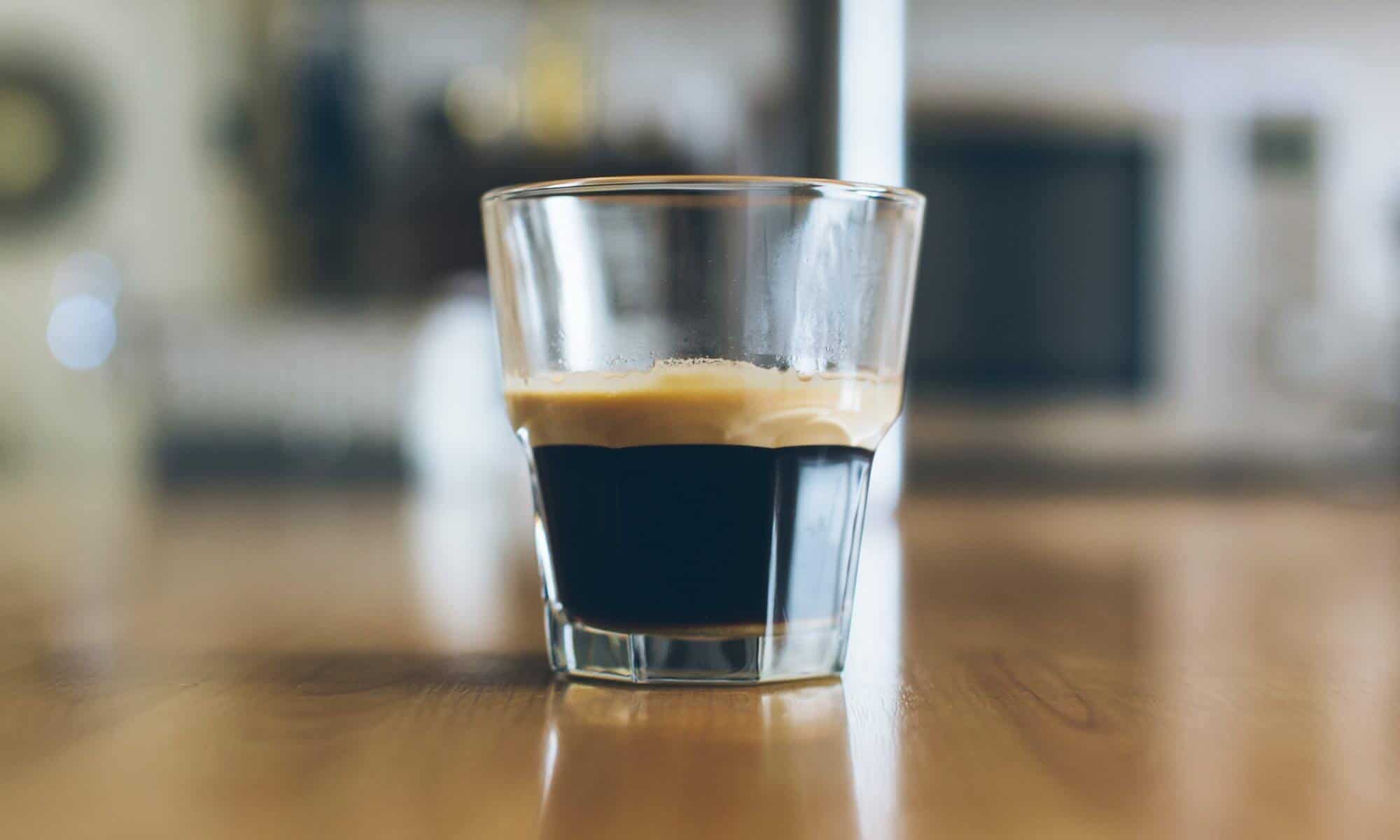 Now that you are aware of how much coffee you can find in your favorite fast-food chains, it is time you learn how much caffeine is too much caffeine.

While drinking coffee can bring several health benefits, getting too much of it can also be harmful to the point of dangerous.

As we said before, it can cause anxiety, high blood pressure, sleep issues, reflux, and more. However, it all depends on many factors such as genetics, previous problems not associated with caffeine, and other factors.

Everyone reacts to caffeine differently still. So it is vital to learn how much caffeine you can or not tolerate according to your demands. But keeping it short always helps.

This is all you need to know about caffeine in coffee and how much you can find depending on the different types out there.

If you are a heavy coffee drinker, this guide will be fun to read. And if you are trying to either maximize or minimize the amount you drink, it will come extra useful.

Remember, it all comes down to how much you can tolerate depending on factors like heart disease, stomach issues, mental health, sleep disorders, and so on. Then, you can choose how much caffeine to consume accordingly.

PrevPreviousBest Stovetop Pressure Cooker – Cook Anything to the Bone!
Nextbest wood for Cutting board – Cut Your Meats & Vegetables Quick!Next

As an Amazon Associate I earn from qualifying purchases.